The most natural way to house train a new puppy​ 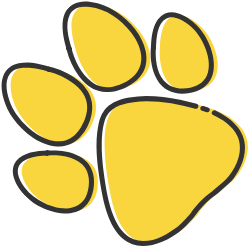 The natural way to house train a new puppy

Although many people feel it is cruel to crate a puppy or a dog, many professional trainers believe that crate training is by far the easiest and most natural way to house train a new puppy. Dogs, whether domestic or wild, will naturally find a den or safe area to sleep. In the wild, the mother dog keeps the den clean until the pups are old enough to venture outside on their own to defecate or urinate. Puppies learn from their mother that they shouldn’t soil their sleeping area. Domestic dogs will display similar behaviour. While still in the whelping box, the mother dog will clean up after her pups. As the puppies grow older, they will crawl away from their sleeping area to an area they choose as the potty area and eliminate there. Like their wild counterparts, domestic puppies are innately predisposed to not soil the area where they sleep.

To be successful, a good crate-training programme uses positive reinforcement. The crate should be a comfortable and inviting place for the puppy. To accomplish this, the crate can be lined with a soft towel or padding. Also, your puppy should want to enter the crate.

Luring is the fastest way to associate the crate with being a good place to go. To lure the puppy into the crate, use small treats. When the puppy goes into the crate to get the treat and explore the new area, leave the door open to let it come out as it wishes.

Repeat this procedure several times to get your puppy used to going into his crate.

The amount of time the puppy spends in the crate is extremely important. Because puppies have poor bladder and bowel control, they should not spend any more than four to five hours in the crate at a time, with the exception of sleeping in the crate during the night. Below is the crate-training schedule I recommend to those who want to use this friendly method of potty training:

It is time to take your puppy back outside. If he begins to play, ignore the play behaviour. If your puppy attempts to engage you in play, stand still with your arms folded. Don’t try to sweet-talk him into going to the toilet. Although most dog owners would disagree, dogs don’t understand spoken language so if you do try to sweet-talk your puppy, he could mistake the tone of your voice with approval. Praise only when your puppy completes the task at hand. Again, he should be allowed a few minutes of playtime and then brought back inside and fed. After feeding, take your puppy back outside for an opportunity to toilet again. Then bring him back inside and place in his crate.

Follow the same procedure as 12 o’clock. The only difference is that you may allow your puppy to remain outside of its crate for two to three hours. Constantly supervise him to ensure that he does not toilet inside the house. If you are not able to supervise, then place him in a small playpen. These can be purchased at your local pet shop or online.

Take your puppy outside to go to the toilet. When he is brought back inside, give him his last meal of the day. A young puppy should be given at least four meals a day until it is four to five months of age. As the puppy grows, the number of meals is decreased, and the amount of food is increased for each meal. After feeding remember to take your puppy outside.

This should be today’s last venture outside for the toilet. Allow very little playtime during this period so that the puppy will not expect to be played with during this late hour. Return your puppy to his crate for the night. If he whines or barks to be let out, ignore him. Soon your puppy will learn that its complaining will not be rewarded, and he will soon stop and go to sleep.

Follow this schedule for seven to 10 days. After this time period, reward the pup with more time outside of its crate. If you have to leave the puppy alone for any length of time, it should be placed in its crate. It will learn that the crate is its safe place to den while its master is away. 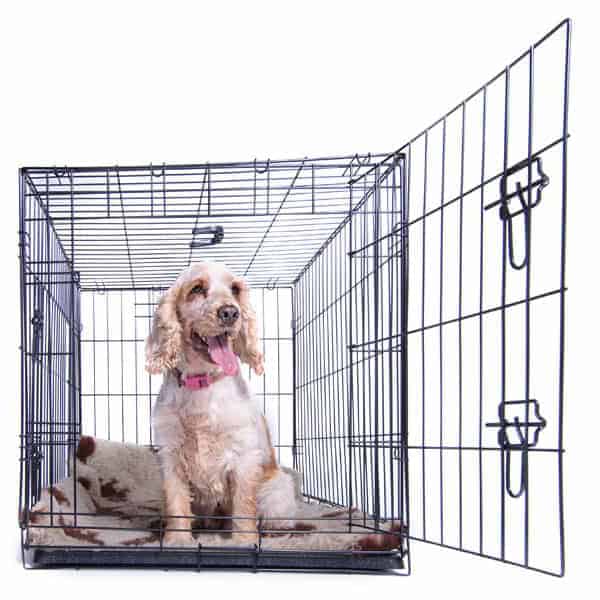 There are a few precautions that you should follow during crate training:

Never crate your puppy with a collar on as they can choke themselves to death. It's probably a good idea to remove any collar while your puppy is in the crate.
If you are going to place a chew toy inside the crate, use safe toys only, nothing the puppy can tear apart and choke on while you're not there. Squeaky toys need to be checked regularly because the squeakers can become exposed and swallowed.
Do not leave your puppy unsupervised with rawhide chew bones as they can easily choke on them.

Puppies that are properly potty trained make better pets that all family members can enjoy and are more likely to be kept permanently by their original owners. By using positive and consistent training methods, a new dog owner will find that training is not only effective but rewarding as well. Crate training a new puppy will give it a good start in its new “forever” home. Remember, good dog training is not expensive…it is priceless.

Shandell Dogs is one of the top dog breeders in the country. We breed for soundness, temperament and type.

Shandell Dogs is one of the
top dog breeders in the country.

We breed for soundness,
temperament and type.

We are pleased to announce our new online shop is now live with some great new recipes.

Visit Shop
We use cookies to ensure that we give you the best experience on our website. If you continue to use this site we will assume that you are happy with it.AcceptPrivacy policy